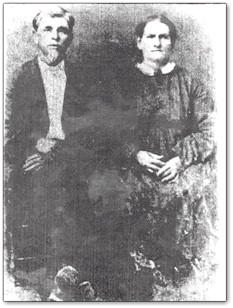 My understanding is that this letter remains in the possession of the Saunders family of Weatherford and Fort Worth, Texas, though many of the family business records have been donated to the Texas Christian University archives. Roland Saunders Jary, a great great-grandson of Thomas Bailey Saunders I, sent the editors of the Sanders/Cook Web page a copy of the letter on January 13, 1999. Roland Jary's copy was provided by Thomas Bailey Saunders III (1906-1974) in April 1972. Thomas Bailey Saunders III was the great grandson of Thomas Bailey Saunders (1816-1902). I do not know for certain the provenance of the letter from the 1890s until 1972 but assume that the original was in the possession of the family of Elkanah Shuford Saunders from the time it was originally mailed until TBS III started his own research into his family history in the 1940s or 1950s and, at that time, the original may have been returned to the Fort Worth family by one of Elkanah Shuford Saunders' children or grandchildren. It is also possible that TBS I made a copy of the original before he mailed the letter.

People mentioned in the letter:

"Two Saunders brothers."  These have not been identified. There may have been two immigrant brothers but the Blackbeard part of the story is dubious, though it is possible that a Saunders was part of the crew that killed Blackbeard.

"My grandfather" is William Aaron Saunders (about 1735-1782) of Montgomery County, North Carolina. Sylvia Escat Saunders (1883-1963), the wife of Thomas Bailey's Saunders' son George Allen Saunders, referred to the grandfather of TBS I as "Aaron Saunders" in the letters she wrote to other family members in 1916-1918. She did not mention the given name of "William." All the North Carolina records refer to him only as "Aaron." On the other hand,  in his communication with me, the late Roland Jary, great grandson of the first Thomas Bailey Saunders, stated specifically that the name "William Aaron" was always part of the family tradition. In 1948 Thomas Bailey Saunders III wrote in a inquiry to a genealogical organization that his ancestor was named William Aaron Saunders. The reply he received was that his ancestor may have been the Captain William Saunders who retired on January 1, 1783. Thomas Bailey Saunders III accepted that suggestion and used it in his records, but we now know through documentary and DNA evidence that the army captain was a member of a different Saunders line from the ancestor of TBS. Aaron Saunders of Montgomery County, the real ancestor of TBS, died before November 1782, according to estate records of North Carolina. I have retained the name of "William Aaron" in my files for the brother of Moses, Aaron, and Francis, though somewhat dubious that "William" was actually his first name or that it was even part of the tradition until the twentieth century. Besides, middle names were somewhat uncommon in America until well after the American Revolution.

"His brother Isaac" is Isaac Saunders (about 1737-about 1825), brother of William Aaron and the Reverend Moses Sanders.

"They had one sister. She married a man named Hamilton." Other family tradition is that the sister was named Tabitha. The man she married was probably a brother to Moses Sanders' wife, Mary Hamilton.

"Had two brothers, Ben and Joe, they moved to Alabama."  "Ben" appears to be Benjamin Sanders (about 1766-about 1849) who did indeed move to Jackson County, Alabama. "Joe" is probably a reference to Ben's brother-in-law, Joseph Sanders (1793-1863) who also moved to Alabama. Joseph was the husband of the sister of Ben's wife, Mary Sanders. Ben does not appear to have had a brother named Joe, but Ben and his brother-in-law "Uncle Joe" Sanders both moved to Alabama during the 1830s.

"Old lady in New Orleans, she was a Saunders."  The idenity of this person is a complete mystery but if she was elderly when Thomas Bailey Saunders I met her, she must have been at least as old as he and therefore born before 1817 or shortly thereafter. I have often wondered whether this statement in the text of the letter as it was printed in the transcription was actually part of the original letter written by Thomas Bailey Saunders I in the 1890s. The statement would make more sense if it were a commentary note written in 1972 by TBS III over the orginal text of TBS I and if the reference was to Sylvie Escat Saunders(1883-1963). Not only was she older than TBS III but she lived in New Orleans and she was interested in genealogy and it is probable that she and TBS III exchanged information. Perhaps the note got incorporated inadvertently into the text during the transcription.

The people in the second paragraph are the brothers and sisters of TBS I and their children:

Since TBS I mentions that his brother Harris and he are the only two surviving children (out of 15), we know that the letter was written between  March of 1894 when their brother Stephen died and May of 1902 when Thomas Bailey Saunders himself died.

"This is a copy of a handwritten letter form T. B. Saunders, (born in
1816, Fayetteville N.Carolina, married in Alabama-moved to Mississippi,
then to Texas. Died 1902, buried Saunders, Texas.) to a nephew, who had
inquired about his name and ancestral background. The date when the
letter was written is unknown-but judged to be in the late 1890's. It
no-doubt contains some humor fiction regarding one of the original
brother emigrants to America dropping the "U" out of his name. Also
having his grandfather die on the battlefield probably sounded a lot
more exciting than dying form old age--which Capt. William Arron
Saunders did, according to the files of the Library of Congress, as he
was still a Capt. in the 1st North Carolina, and transferred to the 4th
February 6, 1782, and retired Jan 1st, 1783.

The original letter is so worn and yellowed - as well as torn - that it
would be hard to Photostat, so the following typewritten copy will have
to suffice."

There were two Saunders brothers who came from England long before
the Revolutionary war. At that time the Pirates were very bad on the
North Carolina coast. The governor of N.Carolina outfitted a vessel to
catch them, and in making up the crew he took one of these brothers, and
they caught old Black Bear the pirate and hung him to the mast arm. The
crew got a good deal of money, and when that brother came back he left
the U out of his name. This the reason so many spell their names
Sanders.

My grandfather married in Virginia. My grandmother's name was Joan
Bailey, of the famous old family of Virginia. My grandfather was killed
in a fight with the Tories. His brother, Issac, which is your great
grandfather, was the first man that ever built a house on Cross creek
below Fayettville. And another brother by the name of Moses was a
Baptist preacher and they had one sister. I have seen her myself. She
married a man by the name of Hamilton. I have seen your great
grandfather and his wife, and they were very old then.

Your grandfather had two brothers, Ben and Joe, they moved to
Alabama and their families are their yet. I saw an old lady in New
Orleans a few years ago, she was a Saunders and she told me the same
story about the Saunders. I have told you all about the old generation
that I know and will now tell you about the new. In the first place,
brother Steven has two daughters in west Texas and two sons in Oklahoma,
all rest are dead. Brother Luke has two daughters in west Texas, all
rest are dead. sister Pallie has one daughter in Okla. four daughters
and one son in alabama. Sister Tibitha, her children are all dead.

Sister Joan has three children in alabama. Sister Agnes has five
children, three in Texas, and others in Alabama. Brother Harris has two
daughters in northern Texas, and rest in Mississippi. All are doing
well. Brother Jack has six children and the widow and all the children
are living in Alabama. Bro. Harris and I are only two living of the old
family. I don't know where sister Sallie's children are. I don't know
where bro. Allen's children are either. I have ten children, Matt,
Bill, George, John, Jan, Allen (he is dead), Nancy, ann, Mary and
Pallie.

Return to the main page of the Sanders of Randolph and Montgomery Web site.