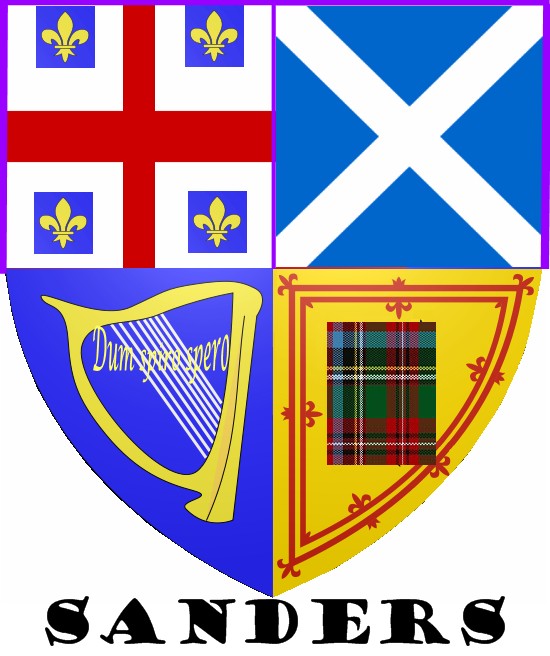 Our Sanders of Randolph and Montgomery were a border people, tradition ascribing their origin to  England, Scotland, or Ireland. If any of our Sanders ancestors had a coat of arms, that design should have been reflective of the diverse geographical origins and pioneering spirit of the Sanders family, so here is my attempt at heraldic design, keeping in mind that all of this is kind of silly, at least for Americans.

This lower half of this design is based loosely on the arms used by king James I in 1603 when he became the first king of England from the Scottish royal house of Stuart.

Upper left quadrant: cross of St. George, patron saint of England.  Until the seventeenth century this was the historic flag associated with England. Within each segment of the cross is a gold and blue fleur-de-lis, or lily flower, one of the oldest symbols of heraldry and associated with many symbolic meanings. It was one of the favorite emblems of the royal houses of France, England, and Scotland. In the Middle Ages, it was said that the three petals of the flower represented faith, wisdom, and chivalry. For hundreds of years, the fleur-de-lis emblem has been used to mark the rose on a compass and thus it has become a symbol of the outdoors, the wilderness, and the effort to find direction in life.

Upper right quadrant: cross of St. Andrew, patron saint of  Scotland. The saltire cross is the national flag of Scotland and is one of the oldest flags in existence, in use since the early Middle Ages. . In the United States, it appears in the  flag of  the state of Alabama where many of our Sanders ancestors lived.

Lower left quadrant:  Irish harp from the royal coat of arms of Ireland.  The harp is one of the oldest heraldic symbols of Ireland and is popular with Catholics and Protestants alike. The Latin motto in this quadrant, "Dum spiro spero," means "While I breathe, I hope,"  meaning so long as I am still living, I have hope, a phrase which is expressive of the perseverence and determination of the Scots-Irish immigrants in the face of adversity.

Lower right quadrant: Scottish royal standard banner border, with an insert of the official tartan of the state of North Carolina. This tartan was designed in 1981 by Peter Mac Donald of Scotland and adopted by North Carolina in 1991. It was based on the design used in the coat of King Charles II at his marriage in 1661.  The word "Carolina," of course, comes from the Latin word for Charles. North Carolina, of course, was the home of the four Sanders brothers-Moses, Aaron, Isaac, and Francis--who were the progenitors of our Sanders.

So far as I can determine, the images in this coat of arms are from copyright free sources, so feel free to copy or use this image anyway you like. It is well to remember that in the  British Isles, there was no such thing as a "family coat of arms," only arms granted to individuals that may or may not be passed on to descendants, and there are still laws on the books that regulate who is granted arms.  In America,  you can use any emblem you like as a symbol of the ancestry of your family. It makes little sense, however, to use  a coat of arms that once belonged to a member of the British gentry who just happened to have your last name, for the chances are good that person is entirely unrelated.

Click on the icon to return to beginning of Web page,
Sanders of Randolph and Montgomery